China is a sports market on the rise. In 2016, the turnover generated by the sports industry in the Asian giant exceeded 200,000 million euros. Considering this promising economic figures and within the framework of the EU4SportsClusters Alliance project, INDESCAT, Cluster Sports & Technology and Cluster Montagne jointly took part in a trade mission to Beijing, organized from 13rd to 16th February, in coincidence with ISPO Beijing.

As part of these European sports clusters, 17 European companies and organizations from France, the Netherlands and Catalonia  joined a trade mission to Beijing with the aim of establishing business relationships with the Chinese sports industry in the mid-term. 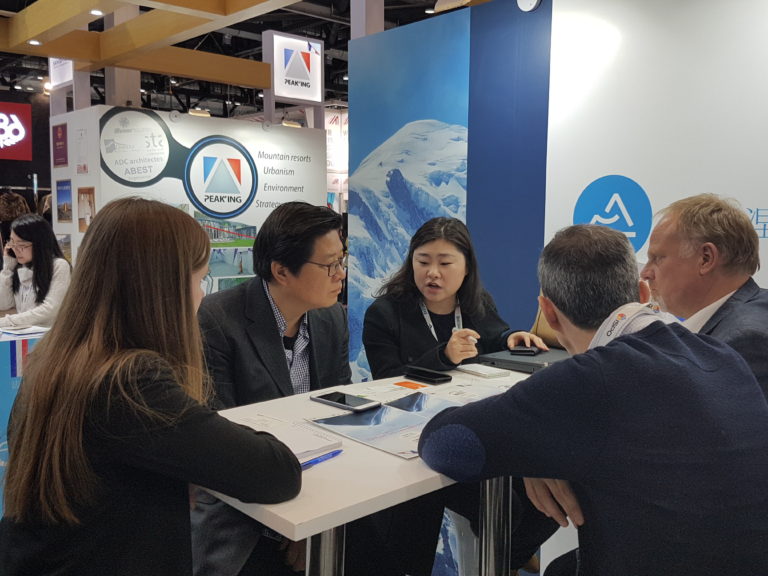 The European delegation visited different public institutions in order to get a deep knowledge of the Chinese sports ecosystem, such as two different areas of the General Administration of Sport of China. On the one hand, they visited the Sport Equipment Administrative Center, a department of GASC linked to sports equipment (equipment purchase, bidding and management for national sports teams, market development of Chinese Olympic Committee and national teams, etc.). On the other hand, they visited the Winter Sport Center the highest administration for winter sports in China (focusing not only on the Olympics, but also on sports promotion, marketing, research, biddings, etc.), which also runs the Chinese Sporting Goods Federation.

As part of these collective meetings, the delegation visited Decathlon’s flagship store located in Beijing. The company offered a complete overview of the Chinese sports sector, together with a broad description of its strategy and business plan in this huge market. On the last group visit, a global Chinese project was presented to enhance sport practice in Beijing: a sports complex on football and winter sports to be inaugurated by the end of 2018.

The European organisations also attended ISPO Beijing, the leading multi-segment sports exhibition in Asia. Located at the Chinese National Convention Center, it gathered 728 sport brands and attracted more than 40,000 visitors. With the aim of exploring future collaborations between this global sports business platform and the clusters members, the three participating clusters met Tobias Gröber, ISPO General Director. ISPO Beijing also became a perfect scenario to meet the General Secretary of the China Sporting Goods Federation, a Chinese association made up of 700 members engaged in research, manufacturing, marketing and distribution of sporting goods.

The European participant companies also had the chance to get individual agendas to meet local companies and organizations. More than 130 bilateral meetings were organized between the Chinese and the European organizations to promote future business relationships among both markets.

Within the framework of the EU4SportsCluster Alliance project, four markets have been analysed (the USA, Japan, China and Iran), two missions will be carried out (China and the US, which will take place in September) and five export groups are being created to facilitate companies internationalization.

Besides being a sports market with a sustained economic growth, China has hosted numerous world sports championships over the years. Moreover, China is the first country in the world to host both the Summer Olympic Games (2008) and the Winter ones (2022). Those, among others, are the reasons why the EU4SportsClusters Alliance project has chosen China as an important and valuable target market for companies in the sports sector.

← Best wishes for 2017 International Sport Technology Matchmaking at Grand Depart →
We use cookies to ensure that we give you the best experience on our website. If you continue to use this site we will assume that you agree with it.OkNo