The 2012 EPSI conference: 3 days of interation between professionals on the chances and challanges for innovation in the sports business, a brief report. 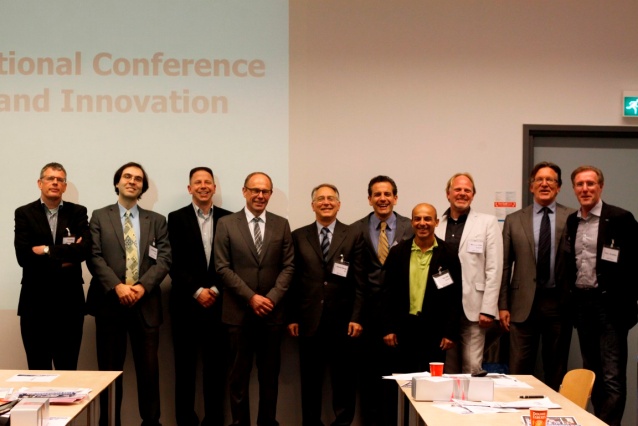 On the 18th of April, a series of keynote speeches were given by representatives from the academia, the sporting goods industries and other relevant stakeholders.

Paul Althuis from TU Delft presented the University and its Valorisation Centre (www.valorisationcentre.tudelft.nl), which supports, stimulates and facilitates scientists and faculties in knowledge valorisation. The centre works as a bridge between University and the business world.

Alberto Bichi, EPSI co-executive director and FESI Secretary General, (Federation European Sporting goods Industries http://www.fesi-sport.org/) introduced the European Horizon 2020 (www.ec.europa.eu/research/horizon2020. It is the EU Framework Programme for Research and Innovation for 2014-2020 and it is a funding scheme that will replace the FP8. Its priorities will be excellence in science, industrial leadership and societal challenges. There is going to be a simplification in the rules for participation and strong participation by SMEs will be encouraged. The Commission has proposed an 80 billion euro research and innovation funding programme. Parliament and Council negotiations on the basis of the Commission proposals and budget negotiation are currently on-going.

Frank A. Dassler is president of FESI and part of the Dassler family who founded the German sporting goods companies adidas and Puma. He is adidas’ General Counsel for the adidas Group. He briefly presented FESI (http://www.fesi-sport.org/), the Federation of the European Sporting Goods Industries that represents the sporting goods industry vis-à-vis the European Institutions and European authorities. It represents some 1,800 companies with an annual turnover of more than 65 billion Euros. He illustrated the link between sporting goods and Innovation. He mentioned that there are various steps in the conception of a technological product: range planning, product briefing. Eventually, design, prototyping and testing lead to the commercialization of the new products. In the sporting goods industries, R&D is very competitive and companies are not willing to share it. He underlined that innovation is closely linked to engineering and processes e.g. in the elimination of glue in the shoes by using a pressing system that reduces waste. A Research Network is crucial for Innovation and that’s why adidas has an extended one. He provided some examples of the use of innovative technology in the past such as in the running shoes, in soccer shoes and in football balls. For instance, a computer has been integrated in a shoe. According to Frank Dassler, the future of R&D in the sporting goods industry is linked to smartphones e.g. for medical applications.

Dick Hendriks, member of the Board of Directors of EURATEX and Director Corporate Technology Royal Ten Cate, presented textile materials as enablers of safety and comfort, of health and care, of mobility and transport and of creativity industry e.g. fashion. He explained the importance of new materials as an alternative to today’s materials since they are lighter, flexible, multifunctional, durable and energy-efficient. There is a continuous innovation in textile and fashion that focuses on eco-innovation and resource-efficient processes that involve recycling.He talked about new business models that have had an effect on the customization and the personalization of the product. He emphasized that technology in practice is related to nano technologies, bio technology, advanced production technology, micro systems and electronics ICT, macro molecular chemistry. They lead to the scientific development that enables technological development which results in product development such as robotics, membranes and enzymes.

Hans van Breukelen has been a professional goal keeper for several clubs and is the Director of Sports and Technology (http://www.sportsandtechnology.nl/). George de Jong is former volleyball player and the director of InnoSportNL (http://www.innosport.nl/). Together, the two presented the Dutch approach on sports and innovation where the foundations Sports&Technology and InnosportNL operate to facilitate collaboration between sport, business and research institutes. Both parties intermediate for open innovation projects in sports. InnoSportNL operates on national level and is partly co-funded by the Dutch government. Sports and Technology, which is the technology partner for InnoSportNL, is the initiator and developer of several national and regional field labs. The two organisations work together to strengthen the Dutch sports and innovation climate, to create a national network on sports and innovation and to develop projects.

Cees van Bladel, former Olympic sailor has set up the Sports and Technology foundation. He introduced the ProFit project (www.profitproject.org) which started in 2010. The aim of the project is to stimulate innovation and to create business with the creation of Field-labs. A field-lab for sport innovation is a research and development where people engage in sport and activities. Companies can install their new prototypes in the Field lab so that people can test them. Within the ProFit project, Field-labs will be developed in four European cities.

Marc van der Zande is the R&D program manager for Sports Products at InnoSportNL. He presented the EU4SportsClusters project (http://www.clustercollaboration.eu/international-projects). The purpose of the project is to support SMEs in improving their exports. The project started in January 2012 and will last for two years. Specific objectives are to foster international cooperation amongst SMEs using clusters as a tool and to increase the visibility of the sports clusters inside and outside Europe.

Alberto Bichi presented the PROsumer.Net project (http://prosumernet.eu) which was launched in June 2011 and will end in May 2013. It fosters networking between European technology platforms addressing design-based Consumer Goods Industries and related Research and Technology Field. The idea behind the PROsumer.Net initiative is that design-based consumer goods industry is highly creative and innovative and that it is a vital and vibrant part of the EU economy. Moreover, it uses thoroughly advanced technologies and has common research and technological development that need appropriate political support. Results of PROsumer.NET should ensure a joint strong contribution of consumer goods industries to EU research, innovation and industrial policies. 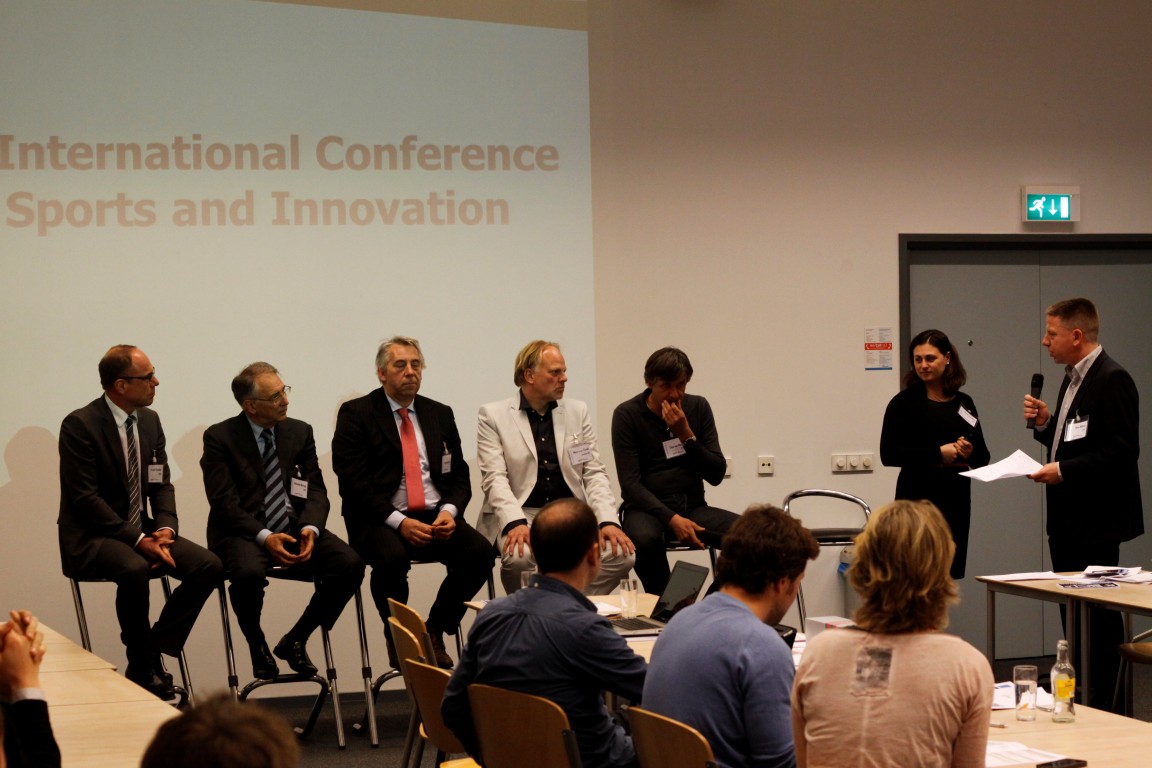 In an animated discussion, led by Rene Wijlens, chances for sports and innovation in the EU were discussed among the speakers of day 1

On the 19th of April, EPSI and its Working Groups were presented more in-depth.

Rene Wijlens and Alberto Bichi, both executive directors of EPSI gave a detailed insight of EPSI (the European Platform Sport Innovation- www.epsi.eu) in more detail. EPSI is a membership base-networking organisation. Its mission is to stimulate interaction between innovative high-tech companies, SMEs, universities and research institutes. Its aim is also to create an innovation-stimulating environment for European sport sector and to contribute to the dissemination of knowledge and of innovation opportunities. EPSI’s activities include the creation of business opportunities among its members, the coordination and managing of EU and national project and providing information on European and national call for proposals and public tenders. Then, each Working Committee leader presented its role within EPSI.

The Consumers Working Committee was presented by Mercedes Sanchis (IBV- Spain www.ibv.org/en). She underlined the importance of knowing the final user’s needs. She explained the POI – People- oriented innovation model that considers people to be the central axis of innovation.

Christos Spitas (TU Delft- The Netherlands – home.tudelft.nl/en) introduced the Working Committee on Materials and Technologies. He highlighted the importance of materials that are lighter, stronger and smart and of nano-technology in sport.

The Working Committee on Processes was illustrated by Andrea Brambilla (Assosport- Italy www.assosport.it). He gave a speech about the main challenges of the supply chain management, e.g. eco-sustainability.

The Working Committee on Sports Information Systems was illustrated by Alain Belli (Sporaltec- France- www.sporaltec.fr). He maintained that connecting the human level with production and production with the community is problematic.

They also animated four workshops on their topic. The public actively participated in the workshops. The results of the workshops will the the basis for EPSI future actions.

n the 20th of April, the Conference participants had the opportunity to visit the InnosportLab Sailing in The Hague.

Serge Kats gave a general presentation of the Lab. The presentation was followed by two lectures that were given by Joost Pluijms and by Nico Persoon on Mobile Eye and on Composail. The session and the confercence was closed by René Wijlens.