As a starting event in the 2nd European week of Sports, the Brussels based House of Sports is organizing its conference with the topic: “Physical activity: tomorrows cure”.  EPSI is one of the partners in the house of sports and one of the organizers of the event.

The European Week of Sport

For the second time, the European Week of Sport will be held in September 2016. The official campaign will be launched on September 10th 2016 and will last throughout the month. This initiative, implemented by the European Commission for the first time in 2015 aims at promoting sport and physical activity across Europe. 31 National Coordinating Bodies, supported by 30 European partners fostered the organization of 7000 events across Europe, mobilizing 6 million participants.

The House of Sport

Building on the momentum of the first EWoS, the House of Sport was created in September 2015 as a joint initiative of now 20 leading organizations[1] in the sport and active leisure sector.The main objective of this platform is to benefit from stakeholders’ synergies and join efforts in an organized cross-sectorial approach to raise awareness on the benefits of sport and physical activity.

A “State of the Art” Conference

Physical activity is an important contributor to human health and well-being, and the full extent of its benefit is only now becoming acknowledged by researchers and policy makers. The physical health outcomes of regular physical activity are compelling and pressing.

Physical activity is important for people of all ages. However, evidence suggests that activity levels, in Europe and elsewhere, are often low and overall declining.

As our knowledge of the importance of physical activity grows, so does our awareness of the concerning rates of inactivity across Europe, for all ages and social groups. In a majority of countries in Europe, large proportions of the population are so inactive that their health is at risk. In case of children, sedentary lifestyles place them at an increased risk of chronic and/or non-communicable diseases in both the short- and long-term.

Ironically enough, the physical health outcomes of regular exercise are so compelling and urgent that they are in danger of excluding other outcomes by their dominance. This would be unfortunate, as the cases for the wider benefits of physical activity suggest that it can make distinctive contributions to a wide range of domains, including educational achievement, the development of life skills and social skills, as well as psychological well-being and collective economic health.

The 20 House of Sport partners share these observations. This document presents a concept to join efforts in supporting the European Week of Sport by organizing a “State of the Art” Symposium on the following topic: 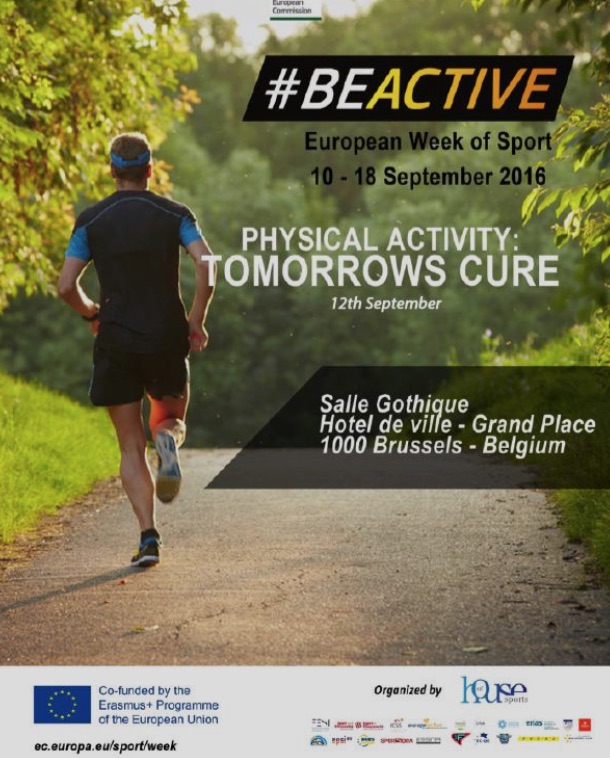 Unlike the save the date indications the conference will take place now only on September 12th in Salle Gothique (Hotel de Ville, Grand Place, 1000 Bruxelles) during the European Week of Sport and will stage three distinctive panels: healthy bodies; healthy economies; healthy societies.

The attached program also includes high-level speakers, sessions and deepening discussions on topics of your own choice with Q&A sessions. The event will be an excellent environment for matchmaking and interact with sports organizations, policy-makers, and governmental partners.

At the end of the conference a 5KM walk will be organized by Energy Lab. We are looking forward to welcoming you.

← Save the Date: House of Sports conference 2016 EPSI Brokerage event →